This morning I was met outside our Hotel by two motorcycle clubs on Harley’s! Very cool bikes ready to escort Parky and myself to the screening of Easy Rider. The streets of Stockholm were lined with people watching the loud thunder of motorcycles screaming through downtown headed to the theatre. We rode in a Mini Cooper which is the festival sponsor car! Great crowd in the theatre as always with great enthusiasm for Easy Rider, a film I wrote, produced, and acted in along side Dennis Hopper and Jack Nicholson in 1968. It was released in1969 on July 14th in NYC at the Beekman Theatre. A large line ran around the block of the theatre twice to get in and see this film that changed the way films were made in Hollywood. It is now in MOMA and LACMA’s permanent collection and is in the National Archives of the United States! Impressive and we are coming up in 2019 on the 50th anniversary! “Far Out Man” as Dennis Hopper would say!!! 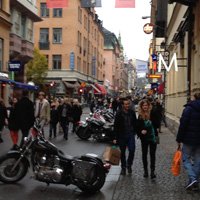