One of my favorite people, Ted Turner 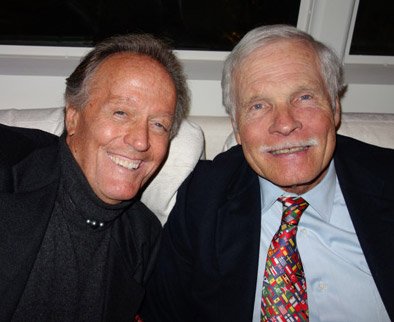 One of my favorite people, Ted Turner

Last week I met up with one of my favorite people, Ted Turner. We bumped into each other at Jane’s 75th birthday party and spent the better part of the evening catching up. I met Ted when I opened the front door to my sisters house in Santa Monica on their first date. He said, “Hi, I’m Ted”. I said, “Hi, I’m the Brother. Come on in”. That’s when we started calling each other Brother. I like Ted because of all the things that he has done for this planet of ours. He is committed to feeding the hungry, getting medicine to the sick, getting clothes to those without clothes throughout the world. He puts his money where his mouth is. He is a first class human being. He gave one billion dollars to the United Nations making sure that the money did not go thorough the system and get eaten up on the way. He made sure it got to the field where it was needed. Ted isn’t in to making donations to bureaucracy. He has a passion for the ocean and its health which I share. A passion for the pristine places in our country which I share. He is a maverick which I share. He is a one of a kind. A good person. A good father. A good brother. I like all of his children. All are great people. His son, Rhett and I made a documentary called ‘Pollinators in Peril’ in 1999. The film is about the food for hummingbirds, bees, hummingbird moths, and certain bats who are pollinate our flowers, our fruit, our nuts, practically 60% of what we eat. We traveled to South America, the rain forests of Panama, the deserts of southern Arizona and New Mexico, and to the agave fields in Mexico in search of the pollination process. It was fascinating and I learned a great deal about how fragile our ecosystem is. I look forward to joining forces in the near future with Ted and his family and helping our planet get unpolluted.