This has been very hard for me. Larry Hagman was like a brother to me and my dear and close friend for so many years. I am in New York filming, and I want to be in Dallas today and then in Los Angeles tomorrow for his memorials. Larry would say, “work comes first, Peter. Work always comes first.” I am recalling so many things he did throughout our 52 years of friendship. Applauding every sunset. Whistling on Sundays (Larry never talked on Sundays). One time, he said to me, “What am I going to do? There’s a Malibu Colony ‘renaissance fair’ on next Sunday, and I must do something. You know I don’t speak on Sunday.” I suggested that he should be like a palmist or mystic. I said he should put a sign near his van that said ‘Hagman listens to everyone’. His van was similar to a brown UPS van. He put 2 wooden captain chairs in the front as driver and passenger seats, and his wife, Maj, put rugs, paisley cloth on the sides, a queen-size mattress on a hammock under a large clear dome on the top of the van, a full sized couch in the back and many large pillows to sit on. He said the sign should be more exotic. We pondered on the sign and settled on ‘Hagmananda Listens.’ Like a swami or soothsayer, and he did. He wanted it to be more fun, so I suggested ‘Hilarious Hagmananda Listens.’ For 25 cents, he would listen to anyone for five minutes. He put an egg timer (the hour glass style) on a small table to measure the five minutes. And so, many people came into the van and spoke to him (the captains chair could hinge forward to make it easier to get into the back). After a couple of hours, a fellow Malibu Colony dweller came into the van, and asked if all he was going to do was listen. Larry whistled, nodded his head and pointed to the egg timer, which he had turned over to start the ‘session’.

Once again, the man asked if all Larry was only going to do was listen. Hagmananda pointed at the timer, whistled, and the guy began talking. He started to tell Hagmananda that he had just recently married a much younger woman, and his new wife was having an affair with his son. The sand in the egg ran out. The man took another quarter dropped it in a small container, and continued his most bizarre story. Once again, the sand ran out, and Larry whistled, pointed to time, and the man took out another, dropped it in the container, and continued talking. This whole story was making Larry very upset. The sand ran out, and the man put another quarter in the container continuing to tell Hilarious Hagmananda about his disturbing situation. Larry was getting really upset, and when the timer ran out, he gestured and whistled that the man must stop, as he had gone over the limit. This guy really wanted to go on, but Larry was really upset with the whole thing and insisted the session end. The fellow had given Larry a dollar. He left the van and walked on down the road. The kicker to the whole thing was the timer. It finished each session in three and a half minutes, as this was the time it took for a soft boiled egg. Hilarious Hagmananda was quite undone. He was ready to take the van back to his house. Larry was getting a penny and a half more than advertised for five minutes. Larry, quite innocently, had thought the timer was a five minute one. He told me that he would never do the listening thing again. He had listened to 17 people, but the last one was really TMI.

We walked the entire length of the Malibu Colony beach on Sundays carrying different flags each time, and Larry would play his flute, wave to onlookers and whistle. On one occasion, one of the onlookers asked why we were parading and what were we protesting. I yelled out that we weren’t protesting anything. “We are just having fun, and you are either in the parade or you’re not!” You see, we were carrying flags from all over the world. Larry had the Vatican flag, Nepalese, American, Brazilian, Mexican, Italian, Texan, Californian, French, Burmese and many more. We would always end the parades toasting with glasses full of champagne, and applauding each sunset. One time, Larry wore the vestments of a bishop; a long white robe and a tall pointed hat festooned with gold. At other times, he wore monk’s robes.xHe was known as The Mad Monk of Malibu, His Eminence, or Hagmananda. Most of the onlookers applauded and cheered. Some would join the parade. We had fun. This was part of Larry’s credo: have fun to the max, smile, don’t worry, be happy, feel good. 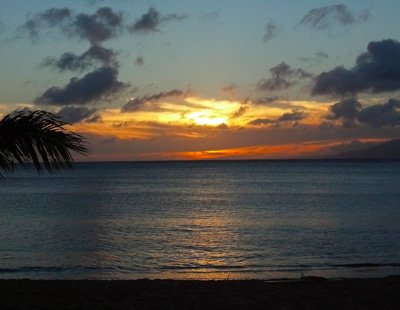 There is a huge hole in my heart with his passing. It will wait patiently, until his flame comes back and fills the void.

Oh Larry, I miss you so much. It’s hard to type through my tears. I will applaud every sunset even the unseen ones for the rest of my life!