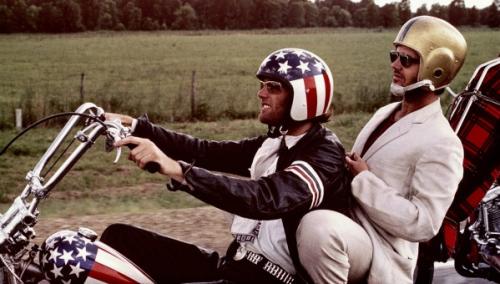 Peter will be attending the Boulder International Film Festival February 14-17th. On Friday the 15th, Easy Rider will be shown at the Boulder Theater. On Sunday, February 17th, Peter will receive the Pinnacle Award at the closing night tribute. Check the BIFF website for details.

Peter Fonda will turn 73 years old later this month. He’s enjoyed a six-decade career as an actor, writer, director and producer and has been involved in more than 80 films.

But no film Fonda helped create made as big an impact on American pop culture and the art of filmmaking as “Easy Rider,” the groundbreaking 1969 road-trip saga Fonda co-wrote, co-produced and starred in.

The Camera spoke via phone with Fonda about “Easy Rider” on Friday. Here is an excerpt from the interview.

Q: Tell me about making that film. It’s kind of regarded as the first truly independent film.
A: Well, there were others, but in the modern big-budget time, they were making movies for the wrong audience. I wrote it when I was 27. I could see the audience, but they didn’t have a movie. “Glass Bottom Boat” or “Pillow Talk” (which both starred a perky Doris Day), that was not their movie. “Easy Rider” came out, and it was their movie.

Q: So when you made it, did you feel like you were really doing something different?
A: I knew certain things were … Dennis (Hopper’s) interesting way of cutting with flash cuts was groundbreaking. I just knew it was different, and I knew what the audience was. I just never knew it would become so big. I just thought, you know what, it gives Dennis and me a track record. We’ve produced something that made money, so we can do it again.

Q: A lot of the dialogue and scenes were improvised. Was that uncommon at the time?
A: Uncommon in American films, other than real underground films. When I first thought of the story I called Hopper. It was 1:30 in the morning for him and it was 4:30 in the morning for me in Toronto, Canada. I told him the story and he said, “That’s great. What can I do?” I said, “You direct, we’ll both act and I’ll produce. We can save some money that way.” He said, “You really want me to direct?” I said, “Of course I do; you have the passion, you know framing … “

I continued to tell the story. I would embellish it and get a little more detail and get a little deeper into it. Then I told it to Terry Southern in October of ’67. He said, “I want to be a part of that … ” (Southern shares writing credits on the film). He gave us the title. In Terry’s southern terms — Terry was from the South — an easy rider is the boyfriend of the hooker. She would come home after gigs and he would give her love. That’s what she wanted. He got to sit there, drink beer and watch television. It was called the easy ride. That’s what easy rider really meant, and it doesn’t matter that the audience doesn’t know that.

So I kept telling the story. We told the story to Sam Arkoff at AIP. He had all these things, like you can’t do a movie where you do a dope deal in the beginning. And the thing was, if Dennis fell three days behind, they would pull him out of directing. I thought, I can’t do that to Dennis, so we said, “Thank you, but no, thank you.”

Within a day I happened to be going to see Bob Rafelson and Jack Nicholson (who earned an Academy Award nomination for supporting actor in the film), who had been a friend of mine since I first got out to California. They were getting ready to shoot a movie called “Head” with The Monkees, because Bob and Bert Schneider had made all this money with The Monkees. That’s what made “Easy Rider.”

I had told the story 20 times before we ever got close to start working on it. So I knew what I was doing all the time. I knew my character — to quote Gary Cooper, “If I know what I’m doing, then I don’t have to act.”

Q: Dennis Hopper and Jack Nicholson have a real busy acting style on screen. You are the other end of the spectrum. I think your performance really holds up.
A: Thank you very much. I do, too. (Fonda laughed.)

Q: On shooting the film’s famous near-final line — “We blew it,” uttered by a despondent Fonda.
A: The heavy line in the film is, “We blew it.” That is the key. Dennis and I had forgotten to shoot it. It was two weeks after we wrapped the movie, we realized we didn’t have the last campfire scene. So we assembled the crew and went into the Santa Monica Mountains — if you don’t light it, you can’t see the difference — and we said we’re in Florida.

He and I were arguing in this motor home. He wanted me to say all this stuff about how we blew our inheritance, we messed up our heritage … We were elevating the level of our conversation. And finally I mumbled that I wanted to play it like Warren Beatty. Dennis’ jaw dropped. I said, “Warren cuts his lines in half and mumbles the line he does talk.” (Hopper disagreed and was getting angry.)

I finally said, “Dennis, they’ve been waiting down there for 45 minutes. First we’ll shoot it my way, then we’ll shoot it your way. Now let’s go out there and give each other a hug and they’ll just think it’s a couple of actors who have been doing our method work in here yelling and screaming.”

He threw his arms around me and said, “I love you, man.” We went down there and did it my way. The thing was, once he saw it — he was not a dumb guy, he was sharp as could be — once he saw it, he knew that was the run.

But, yeah, lots of people have asked me over the years, “What did you mean by we blew it?” And I say, “Look out the window. If you don’t think we’ve blown it, you’ve got to take it a closer look.”

Q: What did your father (actor Henry Fonda) think of “Easy Rider”?
A: I had him come down and look at an early cut. We had to get Dennis out of the room to get it below four hours. My dad watched it and then I went over the next day to his house. He was very serious. He said, “Look son, I know you have all your eggs in this basket. And I’m worried about it because the film is inaccessible. We don’t see where you’re going and why? … I just don’t think many people will get it.”
Even after (it was successful) he thought I was just a loose cannon until he worked for me for one day. I was acting in and directing a film. And then he got it.

Q: One of the things that is still so fresh about the film — and I think this was one of the first films to do this — is the soundtrack. It was popular music.
A: Yep. It was the first film to do that. All of those songs had been hits in their own genres and had been released. When we got it all together and realized that was the soundtrack, we had to show it to all the different bands. Of course, they all gave us their permission. We gave everybody $1,000 for their cut. It was so cool showing it to Bob Dylan. I think he was the last one.

Q: Do you remember what he said?
A: Oh, yeah. I’ll never forget any of it. We showed him a work print, and in that we start with his “It’s Alright, Ma.” And then we interrupt and do the last campfire and then we’re on the road again. And then we start up Bob’s song again. Because once I get blown off and the whole bike explodes, we start up with (a verse from “It’s Alright, Ma”) “a question in your nerves is lit/Yet you know there is no answer fit to satisfy/Insure you not to quit/To keep it in your mind and not forget/That it is not he or she or them or it/That you belong to.”

That was the major punch. After Dennis going down and me going down, you think you’re going to relax? No, here comes the right hook. I loved it, but Dylan said we couldn’t have it (for both scenes). (Fonda laughs.) He said, “Have (Roger) McGuinn do this first part, but you can’t do it after that.” I said, “But, Bob, any good fight’s a combination of punches.”

But he wrote “The Ballad of Easy Rider” (sung by McGuinn, which closes the film). Couldn’t take credit for it because of his (business) deals. So it was credited to Roger McGuinn.

That soundtrack is still selling. It was songs from Dennis and my record collection.

Lineup is set
BIFF officials filled the final time slot — 7:15 p.m. Saturday, Boulder Theater — with “The Iceman,” a 104-minute feature film made in the United States in 2012. The film follows notorious contract killer Richard Kuklinski from his early days in the mob until his arrest for the murder of more than 100 men. It is scheduled for release in May.